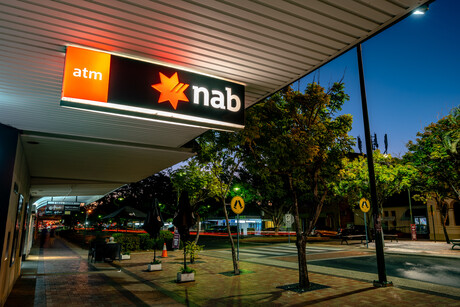 Since 2019, National Australia Bank (NAB) has been through a significant transformation. As with many organisations, the bank’s progress on adopting a more flexible way of working was accelerated by the COVID-19 pandemic. While keen to offer flexibility for employees, NAB also recognises that there is still value to be gained from collaborating in person.

As one of the big four, the bank has bolstered its executive leadership team and implemented a new business strategy built around the concept of ‘twin peaks’, according to Susan Ferrier, who began working as NAB’s Group Executive of People and Culture in October 2019.

“The twin peaks are our employees and our customers. Our ambition for our staff is that they will be trusted professionals who are proud to work at NAB, and that sits alongside our ambition to serve our customers well. Those two ideas determine everything that we do internally,” Ferrier said.

NAB employs more than 32,000 people and serves more than eight million customers at over 900 locations in Australia, New Zealand and around the world. Despite posing a number of challenges for the ASX-listed company, the pandemic has also helped it inject new expectations around culture and leadership while accelerating the bank’s hybrid approach to work.

According to Ferrier, NAB’s progress on adopting a more flexible way of working for its employees has been accelerated by “light years”, with many of the bank’s staff forced to work from home during state and territory lockdowns.

The organisation’s quarterly colleague surveys, powered by Glint, are critical in allowing NAB leaders to tap into how employees are feeling and what is and isn’t working across the business.

“Throughout the pandemic, we’ve continued to achieve our target end-of-year engagement scores, which reflects our strong focus on supporting employees and customers. Beyond that, the real-time data from the surveys is invaluable for leaders as they know what is going on with their teams and issues that need to be addressed. We can be truly responsive to the needs of our people — which is key to building our desired culture,” Ferrier said.

As the pandemic continues, Ferrier believes it’s important to find new and different ways to achieve an effective hybrid workplace and prevent the ‘fraying’ of the company’s culture and employees’ connection to its overall mission.

The past two years have fundamentally changed how we define the role of work in our lives. With this, Microsoft’s newly released 2022 Work Trend Index found that employees’ “worth it” equation — or what people want from work and what they’re willing to give in return — has also changed. Nowhere is this more pronounced than in the role of the office and whether workspaces are worth the commute.

The 2022 Work Trend Index found that leaders must establish the why, when and how of the office, which means redesigning the physical space to optimise for hybrid work, defining the purpose of in-person collaboration and reaching a consensus on creating team agreements that clarify when to come together in person. It is with this level of intentionality in redefining the role of the office that organisations can realise the true benefits of hybrid work.

It is this intentionality that NAB is channelling as it welcomes back staff who have been working from home.

“There is value to be gained from in-person connection, in-person collaboration. And we feel like you soak up the culture if you’re in and around our buildings,” Ferrier said.

“Our new buildings in Sydney, Melbourne and Parramatta are deliberately designed for heightened collaboration. There are a countless number of curated spaces to come together as a team and produce work that benefits from ideas being workshopped.”

NAB’s buildings have been created to support the idea that work is no longer a place where employees sit in a cubicle all day. Rather, it’s a place where people move around according to the work they are doing.

“There’s also a whole lot of surrounding collateral in our buildings that you don’t see if you’re sitting on your screen [at home].

“You might be walking along a corridor and there’s a poster about ‘How We Work’ strategy or a big whiteboard that says, ‘Tell us what you think’. There are those moments when you’re in transition where you’re taking in, almost subliminally, what it’s like to work here at NAB. Those moments aren’t easily replicable in a digital environment,” Ferrier said.

For NAB, hybrid working involves two to three days in the office, and the rest at home. Ferrier thinks most employees are looking for a blend of both. ‘In our recent survey, almost 50% of employees said a key challenge of the pandemic has been the lack of social interaction with their teams. They understandably don’t want to give up the flexibility of working from home for part of the week, but they are keen to come back together, and to see their customers face to face.”

With the Work Trend Index finding that hybrid work is here to stay, returning to the office can no longer be the only solve for rebuilding social capital. And following two years of hybrid and remote work, close to half of employees (48%) say they want to spend less time on things like answering emails and scheduling meetings and more time networking.

A long-time user of Microsoft Office 365, NAB is leveraging technology to enable better ways for its people to connect wherever work happens. According to Ferrier, since introducing Microsoft Teams to the organisation, staff usage of the product suite has increased significantly.

“In October of 2021, the usage of Teams as a collaboration tool overtook Outlook for the first time,” she said.

Ferrier also says there has been a material increase in employee satisfaction around workplace enablement at NAB, following the availability of Microsoft solutions such as Teams.

“The appetite to adopt and master collaboration tools is such that we are now growing an internal digital adoption team to meet the demand, and create a champion network across NAB.”

One of the main ways the organisation helps employees embrace technology to discover better ways of working is through its self-service Workplace Technology Education Hub. The hub is full of educational resources that staff can access on topics such as managing projects and tasks, hosting virtual meetings and using Teams to improve productivity.

Ferrier says NAB has also taken advantage of its cross-company LinkedIn Learning licence, as well as its five-year multicloud partnership with Microsoft, to further educate staff and drive technology adoption.

“The partnership has provided direct access to knowledge and thought leadership from within Microsoft and its partners to help shape our future strategy,” she said.

“It enables us to be an earlier adopter of products such as Windows 11, and to deliver an innovative employee experience.”

“Teams are now working together to test and learn what works for them. We can’t determine what is right for everyone, we have a very diverse business and workforce.”

Shining a light on mental health

Another key finding of Microsoft’s 2022 Work Trend Index was that while employees make hybrid working work for them, digital overwhelm may put work-life balance at risk. To make flexible work sustainable will require teams and individuals to create new norms and set boundaries to guard against being ‘always on’.

Ferrier said that NAB has had a “very clear” conversation with staff about working reasonable hours, but she admits working from home can increase the pressure to be always on and potentially work beyond healthy limits.

“We’re trying to mitigate that with substantial messages around wellbeing and health, and good practices like getting exercise, getting up, having breaks between meetings, not sitting at your desk the whole day and not sending emails at midnight,” she said.

“Even if you’re choosing to work on a Sunday to get ready for the week, the shadow that you cast by sending that email out on a Sunday — particularly as a people leader — is substantial. What we don’t want is to create the expectation that because a senior leader happens to be working on a Sunday, I need to work on a Sunday. We ask all NAB leaders to proactively monitor workloads and to encourage those working extensively outside normal work hours to take time back.”

NAB has also developed hybrid work resources for staff and has conducted multiple wellbeing sessions over the last two years to help them feel supported in this new world.

“We know the pandemic has had a significant impact on people’s wellbeing and we’ve sought to provide information and support for a number of our colleagues who have struggled with mental health,” Ferrier said.

“We’ve had multiple external health, wellbeing and medical experts join employee webinars to normalise what’s happening for individuals, and then to share what’s available in terms of support.

“We’re really shining a light on it and making sure it is something we’re talking about openly all the time.”