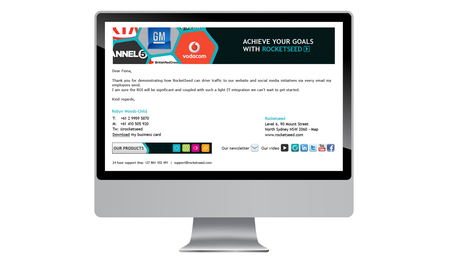 Rocketseed enables its customers to brand their outgoing employee emails, turning ordinary corporate emails into marketing opportunities. With offices in New York, Sydney, London and Johannesburg, Rocketseed relies on a global network of ISPs to host its virtual machines and support its non-standard operating system.

Rocketseed Australia previously hosted its physical servers with a small Australian ISP. The customer support and service uptime were satisfactory, until the ISP provider was acquired by a larger American company. This resulted in a noticeable decline in customer service responsiveness.

“We were forced to deal with support call centres offshore, in India. When we needed data centre access, it took too long to facilitate and we encountered occasionally hours of downtime, which is unacceptable in a business where one provides email services. In the end, customers don’t care whose fault it is,” said Sven Meyer, Client Services Manager, Rocketseed Australia.

The company began looking for a new local ISP, but ran into problems. The Rocketseed platform relies on a virtual machine, cloud-based environment. The company found that the operating system the Rocketseed platform relies on – Ubuntu – was not widely supported by many ISPs in Australia, and those that did support it often charged a premium for the service.

Rocketseed Australia contracted parts of its hosting to a US-based ISP. But while the service and the affordability were satisfactory, the time zone differences between the US and Australia often proved a challenge, as the ISP’s maintenance schedules often corresponded with the Australian business day.

The company looked for a local service provider that would satisfy its requirements, choosing Australian-based ISP Aptira. The ISP supports Rocketseed’s operating system and virtual machine platform, and also offered free installation and set-up in its data centre.

“They were very proactive and were working with us in determining the best set-up and most feasible solutions. They also offered a trial for the period we were transitioning from [Rocketseed] version 5 to version 6, which was a major undertaking, and that gave us peace of mind.”

The ISP hosts Rocketseed’s two virtual machine servers using an IaaS cloud-based platform based on VMware. vSphere is used to access and manage the servers over a secure, firewall-protected VPN connection. The hosting service includes managed backups and disaster recovery, along with managed IT support and systems administration.

Meyer said that Rocketseed measured initial savings of approximately 50%, and gained flexibility and uptime, by transferring its hosting to Aptira.

“Most of our costs come from outsourcing services to an ISP. Aptira allowed us to host our own servers in their environment, which meant the service cost came down for them and for us, and made it a very flexible solution for both our companies,” Meyer said.

Since the ISP is based in Australia, Rocketseed no longer has customer service delays and inconvenient maintenance windows.

The Zerto Virtual Replication (ZVR) 6.0 IT resilience platform offers a single platform for...