A Melbourne technology company has deployed a green IT solution and reduced its carbon footprint by 60 tonnes with bottom line savings of $83,000. Late last year, Pronto Software, an Australian developer of enterprise software solutions, needed to expand server capacity in its Melbourne-based data centre to support turnover growth and staff numbers. The company was looking at having to install more servers and upgrade power, air conditioning and rack space, as well as increase space in the data centre to accommodate the extra servers.

The data centre, with its room full of servers, is central to modern business operations. However, according to analyst firm Gartner, the intense power requirements needed to run and cool data centres now account for almost a quarter of the global carbon dioxide emissions from information and communication technology.

Around 80% of a standard server is idle when being used.

Server virtualisation allows a company to run multiple ‘virtual’ machines on a single physical server. Different virtual machines can run different operating systems and multiple applications on the same physical computer, thus eliminating the problem of under-utilisation that occurs with a standard server. 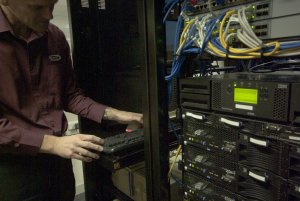 Committed to reducing its carbon footprint, Pronto Software undertook a major virtualisation project by deploying VMware Infrastructure, a virtualisation package. Now Pronto Software has reduced the number of physical servers from 25 to three, resulting in the following environmental and business benefits: reduced its carbon footprint by 60 tonnes per year, eliminated the need to expand the data centre by 44%, reduced the power consumption of the data centre by 20% and data centre air-conditioning load by 40% with total cost savings of $83,000 for the year.

Pronto Software now has sufficient data centre capacity to support its forecast growth over the next five years, while significantly reducing its carbon footprint and achieving bottom line savings.