WebRTC: the key to mass adoption of video collaboration 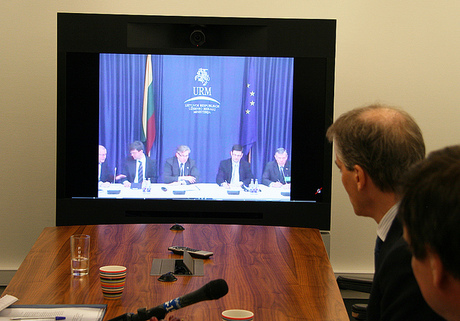 WebRTC seems to promise the nirvana of videoconferencing to any browser, with no additional software to be downloaded and installed. Yet its impact on traditional videoconferencing, and even telecommunications providers, are being viewed with concern by some.

Many within the industry are still unfamiliar with WebRTC - where it stands from a development perspective, why might it be disruptive and what impact it would have on existing video collaboration companies.

The rise of WebRTC

WebRTC, which stands for Web Real Time Communications, is a definition being drafted by the World Wide Web Consortium (W3C) to easily enable peer-to-peer applications for voice calling, video chat and point-to-point file sharing. It will make it easy for real-time communications to be embedded in a web browser-based application.

These applications can be developed using standard environments such as JavaScript APIs and HTML5 and the application runs directly in the browser - no need to download and install plug-ins or other dedicated software.

There has been significant contribution and push from Google, Mozilla and a plethora of browser application developers to support WebRTC, with Chrome, Firefox and Opera browsers already supporting it.

However, as there are still some ongoing debates as to how elements such as video encoding should be done, WebRTC should be seen as an evolving set of specifications.

The free, open source nature of the project along with the ease of development lowers the entry barrier for millions of web developers to easily create applications providing voice calling, video chatting and file sharing capabilities.

The browsers used by more than two billion global users across many different devices will natively support these capabilities - hence adoption of real-time communications is poised to increase.

This ease of development will also enable application developers to focus on the business logic of their application and easily integrate real-time communications into the workflow where there is true value to be gained. This should drive higher adoption of collaboration in general and be a key enabler of communication-enabled business processes.

An example of such business workflow integration could be the use of WebRTC to provide video-based outreach from a business to key clients for improved customer support.

Opening up video to all

WebRTC is based on a different architecture to existing traditional video technology. Instead of having a conferencing bridge at the centre of the network to manage all the connections, WebRTC is a mesh-based technology. Each user sends and receives streams from every other user in the call. This creates challenges when scaling up due to complexities of connection and bandwidth inefficiencies.

Also, WebRTC is unlikely to thrive and gain mass adoption if it exists only as an island. It is vitally important that WebRTC users are able to connect and collaborate with other video environments such as traditional videoconferencing rooms and UC solutions such as Microsoft Lync.

For example, in a video-based call centre it is much more likely that the agents’ systems would be on a more traditional video- or UC-based environment. Therefore, the core infrastructure would still need to somehow bridge the gap between protocols and architecture to connect the video call centre agents to WebRTC-based consumers.

However, the key game changer is that WebRTC opens up development of audio and video real-time collaboration applications to the global population of web developers, thus facilitating innovation at web speed.

Developers familiar with tools and languages such as JavaScript can easily develop compelling UC applications. This will quickly enable integration of real-time collaboration tools to a whole host of vertical application end-user experiences, rather than these solutions having to depend on dedicated video collaboration application software. Users will not have to leave a web page and open up a separate application to initiate a video call. They won’t have to consider their network firewall set-up as firewall traversal is built in to the WebRTC definition.

It is essentially opening up video to all, which is a positive step forward for global communications.