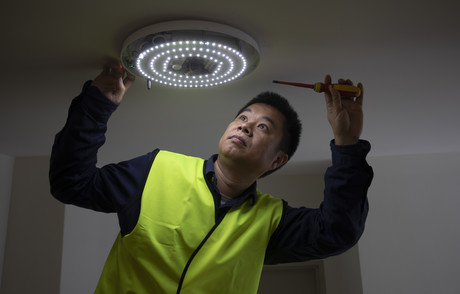 Australian smart lighting company WBS Technology is commercialising new wireless technology developed at the University of NSW that can allow buildings to monitor themselves and “talk” to owners and residents using their smartphones.

The new technology, known as EMIoT, uses LED signs as the backbone of a low-power meshed network designed to cover 99.9% of a building, including underground carparks and air-conditioning systems.

The technology has already been installed across more than 10 apartment complexes, with the latest being a retrofitted apartment building in Castle Hill in Sydney.

At this building, the system is being used to dim lights in common areas including the underground carpark and hallways when there is no movement to save power.

The system has the potential to be expanded to add more functionality, including tracking the status of heating and cooling, monitoring for water usage and leaks, and checking faults in hot water systems.

“We’re actually creating a smart building ecosystem. There are 14 buildings in this apartment complex, and we’ve installed a networked emergency lighting solution throughout them without any cabling and with no supporting network infrastructure,” WBS Technology’s Luke Gibbeson said.

“Our communications gateway looks like a standard exit sign, which relays other emergency lights communication to the cloud and acts like a normal exit sign — so it’s a plug-and-play system. You can install in a new building or retrofit into an older one. As more IoT devices are installed, they can be added to the network, and all managed remotely via a cloud-based service or locally through a smartphone app.”

The technology was developed under a collaboration between WBS and UNSW engineers which began under UNSW’s TechConnect incubator program.

A team of researchers led by Dr Wen Hu of the School of Computer Science and Engineering developed a solution for networking emergency lights based on a meshed network of different wireless communications technologies, including the LoRa standard for wireless sensors, the 6LoWPAN internet protocol for IoT devices and the experimental network protocol RPL.

The team then added a gateway that bridges the different technologies with cellular telecommunications networks, as well as Bluetooth support to provide localised control via smartphones.

The highly publicised web cache detection vulnerability is still plaguing a number of the...