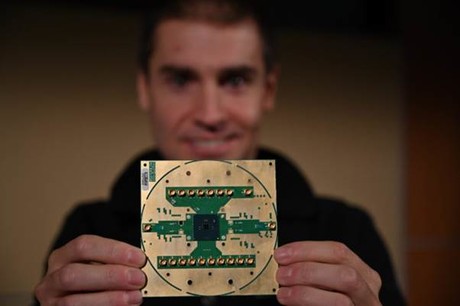 The “first-of-its-kind” chip — dubbed “Horse Ridge” — is expected to accelerate development of full-stack quantum computing systems by allowing users to control multiple qubits simultaneously and support scaling to larger systems, according to Intel, which built the chip with Delft University of Technology and the Netherlands Organisation for Applied Scientific Research (TNO).

To date, quantum computing research has focused on demonstrating the potential of quantum devices using a small number of qubits; however, interconnects, control electronics and temperature requirements have prevented scaling. Often, controlling a quantum processor takes hundreds of connective wires trailing in and out of a refrigerator that keeps the system at a fraction of a degree above absolute zero, the company explained.

“While there has been a lot of emphasis on the qubits themselves, the ability to control many qubits at the same time had been a challenge for the industry,” Intel Director of Quantum Hardware Jim Clarke said.

“Intel recognised that quantum controls were an essential piece of the puzzle we needed to solve in order to develop a large-scale commercial quantum system. That’s why we are investing in quantum error correction and controls,” Clarke added.

Horse Ridge helps negate the wiring problem by bringing qubit controls into the cryogenic refrigerator, as close as possible to the qubits themselves. Designed to act as a radiofrequency processor, Horse Ridge is programmed with instructions that correspond to basic qubit operations and translates those instructions into electromagnetic microwave pulses that can manipulate qubits’ states, Intel said.

Additionally, the chip is designed to operate at around 4 K — close to the temperatures required by the quantum processor.

“This feat is particularly exciting as Intel progresses its research into silicon spin qubits, which have the potential to operate at slightly higher temperatures [1 K and above] than current quantum systems,” Intel said.

In the future, Intel hopes to have cryogenic controls and silicon spin qubits operating at the same temperature — allowing the company to create a solution with qubits and controls in one package.