Faster than USB2, Wi-Fi and Bluetooth 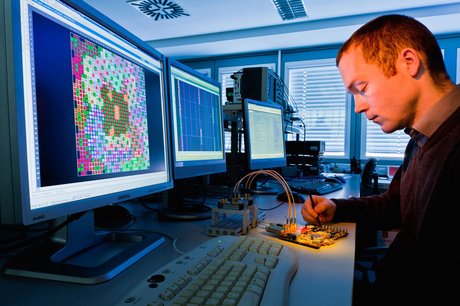 Digital cameras and camcorders deliver high-resolution film sequences that are several gigabytes in size. These can take several minutes to transfer wirelessly to a computer via Bluetooth. Now there is a speedy alternative: the ‘multi-gigabit communication module’ is six times faster than a USB cable.

Frank Deicke, a researcher at the Fraunhofer Institute for Photonic Microsystems IPMS in Dresden, thought that there had to be a way to transfer large amounts of data quickly and easily from one device to another. Obviously, wireless connections like Bluetooth or Wi-Fi are now commonplace. But using them to copy high-resolution video footage of an entire wedding reception to a computer takes a great deal of patience, as transferring several gigabytes of film data wirelessly can take several minutes. Deicke and his colleagues took a different approach. Deicke specialises in infrared technology and, a few weeks ago, the researcher presented an infrared module the like of which has never been seen before.

“It transfers data at a rate of 1 gigabit per second (Gbps). To put this into context, one email character has a size of eight bits. The infrared module is able to transfer 125 million characters per second,” said Deicke. 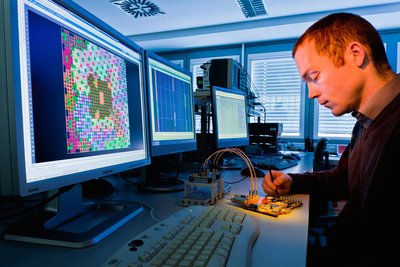 As a general rule, cable connections between electronic devices are faster than wireless ones. In this case it is the other way around. The new ‘multi-gigabit communication module’ is six times faster than a USB2 cable. A comparison with established wireless standards is even more impressive. The IPMS solution is 46 times faster than conventional Wi-Fi and 1430 times faster than a Bluetooth connection, as used to connect mobile phones and earphone headsets, for example.

This performance is above all due to high-speed signal processing. In data transfer, the bottleneck is the encoding and decoding of the data, ie, the packing and unpacking necessary to send data through the air. Before setting off, video information from the digital camera first has to be converted into a radio signal. The receiving device, a laptop for example, then decodes the radio signal and converts it back into film data. All this costs processing time.

The challenge for the researcher and his team was to build a small infrared module with fast-working hardware and software. In addition, the processing time required should be minimal, because the harder the microprocessors have to work, the more electricity they eat up.

“We achieved this ultimately through a clever combination of different technical solutions,” said Deicke.

One of these is the transceiver, an optical component which is able to send and receive light signals simultaneously. The transceiver is only about the size of a child’s fingernail, but manages to fit in a laser diode to send light pulses and a photo detector to detect them.

The decoders that receive and translate the encoded data are also crucial. Deicke and his colleagues had to program ingenious error-correction mechanisms because the light signals become weakened and distorted in the air. Just like controlling a TV with its remote, there has to be a clear line of sight between sender and receiver. This is no problem for Deicke: “You simply place the camera or the smartphone next to the computer or laptop.” The video is transferred in just a few seconds.

The IPMS researchers are very much aware that manufacturers have to accept such technology as standard before it can catch on. Only then will it find its way into a wide variety of devices, enabling consumers to connect almost any laptop to any camera without problems. This is why Deicke is active in the Infrared Data Association where, among other things, he contributes to the 10 Giga-IR working group. This makes his goal for the future obvious: to improve on 1 Gbps.

“Our current infrared module has already demonstrated that infrared technology is able to go far beyond established standards. We plan to improve performance even more in the future.”

Deicke has already been able to show that the transfer rate of his current model can be raised to 3 Gb. 10 Gb cannot be very far off.