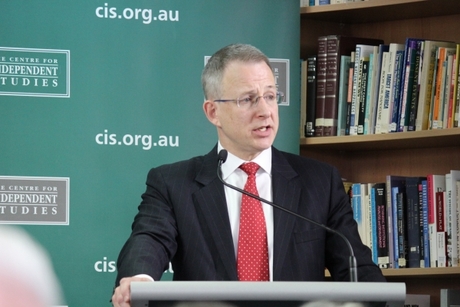 Australia’s future economic prosperity in the digital era will hinge on disciplined public policy which encourages efficiency and innovation, according to Parliamentary Secretary for the Minister for Communications Paul Fletcher.

In a speech at the Centre for Independent Studies yesterday, Fletcher also savaged the previous Labor government’s NBN policy, calling it a “shambolic mess” and complaining of “Labor’s fibre fetishism”.

Economic and political historians have made the argument that times of prosperity in Australia are driven by sensible policymaking and sensible use of resources, Fletcher said. Maintaining prosperity requires “keeping debt under control; keeping taxes as low as possible; maximising competition and minimising regulatory barriers in the economy”, he argued.

Fletcher asserted that the original NBN policy was “a gross failure to deliver [this kind of] disciplined public policy”.

Labor pitched the NBN as helping to drive Australia’s productivity, improve education and health service delivery, and stimulate jobs in the short term and innovation in the long term, Fletcher said.

“Soaring rhetoric indeed - and language which reeked of a “this time is different” mentality. This time we could disregard the normal rules of economic policymaking because the NBN was a shimmering pathway leading upwards to a bright new future of digital prosperity,” he said.

But quoting from a Productivity Commission paper on infrastructure, Fletcher claimed that there were “serious public policy problems” with Labor’s plan for the NBN. “In short, Labor’s approach to the NBN was the very opposite of the rational economic policymaking that has been key to our national prosperity,” he said.

“At the same time, Labor’s fibre fetishism in many ways blinded it to the real question: how can Australia remain competitive as digitisation transforms our economy? A fibre connection will not instantly make small businesses more tech-savvy, nor will it allow start-ups to get the funding they need to build sustainable businesses, nor will it give entrepreneurs the support they need to make great ideas a reality.”

Citing research from Deloitte Digital, Fletcher said that one-third of Australian businesses face imminent and major digital disruption, including the threat of being wiped out by internet-based competitions. Such a pressing issue requires a public policy response, he said.

“Which brings me to the question: what is the right policy approach to take? The Abbott government does not believe that the digital transformation of the economy means you abandon proven public policy principles … Rather, we want to apply these proven principles to best position Australia to leverage digital disruption.”

The first principle is to back the private sector, he said. In another jab at the NBN, Fletcher said the Rudd government’s “default approach was that if a sector was vital to the economy, then we needed to pump billions of taxpayers’ dollars into establishing a state-owned enterprise to dominate the sector.” It is particularly important to back digital economy businesses, considering how important the high-tech sector will be to new jobs creation, he said.

The second principle is to promote Australia’s international competitiveness, and this requires getting an understanding of where Australian companies can be competitive, he said.

“On the plus side, Australia certainly has the capacity to be world competitive in developing and exporting software - and unlike many other products, because it is weightless and incurs no transport costs, we do not face a cost disadvantage from being a long way from major markets. But on the minus side, businesses located in lots of other countries can also be world competitive. So it becomes even more important to work out what your strengths are.”

The particularities of Australia’s economy give us opportunities to develop world-leading technology in the mining and agricultural sectors, Fletcher said.

The third principle is to get the digital enablers right, so the Abbott government is focusing on digital infrastructure, government service delivery and education.

The government’s other major priority is to remove the blockers to digital innovation, Fletcher said. It will fund initiatives aimed at helping entrepreneurs raise capital, access help or advice from their peers and attract and retain talented staff.

Pictured: Paul Fletcher at the Centre for Independent Studies