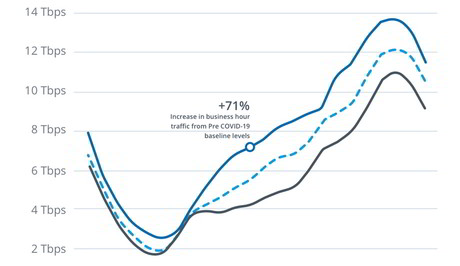 nbn co has revealed that the COVID-19 crisis has caused a spike in traffic on its network, but has insisted that the network is accommodating the increased load.

Peak throughput over the network during the busy evening hours has grown 25% compared to the last week in February to 13.8 Tbps, according to the company’s new Australian Broadband Data Demand report.

Peak throughput during business hours is meanwhile up 21% to 9 Tbps as more Australians work from home to follow self-isolation guidelines.

Overall business hour traffic on the nbn has also surged by more than 70% from pre-crisis baseline levels.

In addition, while the majority of data usage during the crisis is expected to come from real-time video streaming, web browsing, social media and online gaming, there have also been large increases in the use of videoconferencing and business applications as a result of the growing adoption of remote working.

But nbn co said the increases in throughput in the busy evening period also remain well below the maximum capacity available on the network.

“We are very pleased that the network continues to operate well in these unprecedented times and is accommodating the increased data load,” he said.

“It shows the nbn is well prepared to handle Australia’s growing data demand at a time when the nation most needs high-speed, reliable broadband.”

Speaking via Zoom at the Comms Day Summit 2020, Sims said mobile networks are overall also handling the increased traffic “despite serious issues when there was a massive increase in calls” to some government numbers.

“Retailers are increasing plan allowances or reducing excess charges to help their customers adjust, and they should be applauded for this,” he said.

“Last week we granted interim authorisation to allow the NBN Co and Australia’s five biggest RSPs, who together formed a special working group, to immediately coordinate on the significant surge in network demand. We will want vigorous competition, however, to drive the recovery when it comes.”

“It is not only important to protect the effectiveness of the communications networks but also to continue working on reforms that will maintain long-term efficiency and competition post this crisis,” he said.

“What will be fascinating will be the extent to which our world is permanently changed by the current crisis.”