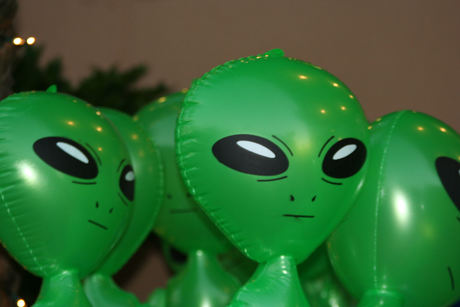 Academics from 11 UK institutions have set up a research network dedicated to promoting studies into the search for signs of alien life.

The academics have launched the UK Search for Extraterrestrial Intelligence Research Network (UKSRN).

UKSRN will coordinate on research covering a range of topics including potential methods for detecting alien signals, the linguistic challenge of deciphering messages and the probability of an extraterrestrial civilisation interacting with Earth.

When astronomers first started searching for potential extraterrestrial radio signals, “the equipment required to sift through the data was expensive and unusual”, O'Brien said in a statement. “But our modern telescopes are potentially capable of conducting these type of observations as a matter of course.”

Leeds Metropolitan University researcher Dr John Elliott, a researcher into the nature of communication, laid out the difficult task that deciphering alien messages would prove to be. “To put the challenge into context, we still have scripts from antiquity that have remained undeciphered over hundreds of years, despite many serious attempts,” he said.

But Elliot's research focuses on whether by analysing human languages and non-human communication, researchers can detect patterns that can be used to identify and analyse intelligence.

“By looking beneath the surface veneer of the arbitrary sounds and symbols used, we can ‘see’ the language machine itself: its mechanisms, constraints and evolutionary forces of efficiency and compromise that shape it.”

UKSRN is also focusing on the paradox between the high estimates for the probability for existence elsewhere in the known universe and the lack of contact or evidence available - what has come to be known in SETI circles as the Fermi question.

Dr Anders Sandberg, of the Future of Humanity Institute at Oxford University, is investigating the question of how distantly in space or time civilisation could be born and still have a chance of interacting with Earth today.

“[Our research suggests that] beyond a certain technological level, civilisations can spread not just across their own galaxy but across enormous intergalactic distances ...There are millions or billions of galaxies from which a civilisation could have reached us, if it were established early,” he said.

This suggests that the answer to the Fermi question is more extreme than previously thought. “If advanced societies wipe themselves out, or decide to not go exploring, they need to converge to this outcome with extremely high probability, since it only takes one that escapes this fate to fill the universe,” Sandberg said.