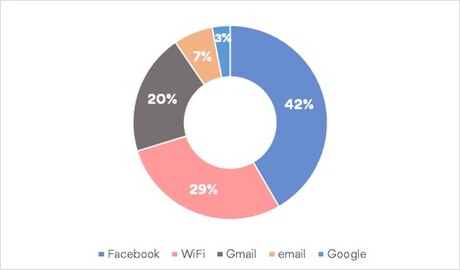 With the number of Google searches related to the key phrase ‘how to hack’ increasing in April 2020, experts from NordVPN investigated what people were trying to hack. Half of Australians (43%) who were looking to break into something were interested in hacking into somebody else’s Facebook account, while 29% wanted to obtain access to a neighbour’s Wi-Fi. Australia is 15th on the list of countries where wannabe hackers are trying to hack into something.

Researchers used Google’s search term analysis tool to search terms that included the keyword ‘hack’. Apart from global trends, search volumes were also checked by country. The analysis was based on search volumes from 13 July to 13 August 2020.

Researchers analysed the monthly search terms and found an average of 171,490 Google searches worldwide about how to hack something. Of this, 46% involved hacking into someone’s Facebook account. The top three countries where people are the most interested in breaking into somebody else’s Facebook account are India (26%), the Philippines (19%) and the United States (13%).

Daniel Markuson, a digital privacy expert at NordVPN, noted that Facebook is the most popular social login to access third-party sites. “According to the Dark Web Price Index, that’s why Facebook accounts sell for $75. Once obtained by a cybercriminal, Facebook accounts can open the gates to Instagram, online stores that hold credit card data and even more,” said Markuson.

When analysing the volumes of ‘hack’-related keywords, NordVPN’s researchers found that Wi-Fi comes second on the most desired list, with interest increasing due to COVID-19 lockdowns as people began working and studying from their home environment. The top three countries where people are looking to take advantage of a neighbour’s network include India (23%), Indonesia (13%) and the United States (8%).

In Australia, the top five things people are looking to hack include Gmail (20%), email (7%) and Google accounts (3%). Markuson warns that although people may think they are of no interest to hackers, research proves that they could be, as neighbours could try to hack into your Wi-Fi network, ex-partners may attempt to control your social media accounts, and random black-hat hackers could attempt to sell your account on the dark web.

To prevent this from occurring, use unique and complex passwords for different accounts. Once hacked, your credentials can be checked against other services, such as email or online banking. To help manage passwords, use a password manager such as NordPass, which generates secure passwords and stores them in a protected vault. This also applies to Wi-Fi routers. Using two-factor authentication can also help, as hackers will need access to your phone or email, alongside your password, to hack into your account.

Another tip is to avoid poorly protected public Wi-Fi. When logging into an online account on a network you don’t fully trust, use a VPN like NordVPN to make the connection private. A VPN encrypts all communications passing between your device and the internet, so no outsider can intercept it.