Panasonic Australia has donated a lightweight, heavy-duty, military-strength Toughbook notebook to Marine Rescue Middle Harbour for navigation on its ‘vintage’ Waveney Class lifeboat, which began life 40 years ago in service with the Royal National Lifeboat Institution (RNLI) in the English Channel. 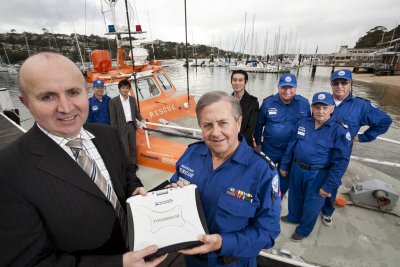 The boat, based at the Spit in Mosman, Sydney, is used by the volunteer organisation for weekend patrols and duties in rescue and assistance to the boating community in Sydney Harbour as well as search and rescue duties along the coast offshore from Sydney. It also takes part in harbour patrol duties at all major harbour aquatic events, such as the start of the Sydney-Hobart yacht race, New Year’s Eve and Australia Day.

“The Toughbook is bringing us into the 21st century by allowing us to install modern computer navigation facilities on the vessel,” said Tony Whybrow, Unit Commander, Marine Rescue Middle Harbour.

The boat is currently equipped with a very basic chart plotter, a magnetic compass and a radar whose technology is several generations old. In addition, as the bridge of the vessel is very open, Marine Rescue NSW needed a computer that was resistant to spray, as well as being able to stand up to the rigours of engine vibration and the constant shock of pushing through heavy seas.

Whybrow added: “The Toughbook will increase our effectiveness as a rescue unit. Housed in a docking station on the bridge, it will run a computer-based navigation system connected to a GPS receiver that will plot the vessel’s position directly on a digitised marine chart on-screen. This information can also be readily transmitted ashore to any search and rescue authority.”

Damien Lee, Product Manager, Toughbook Panasonic, said: “We are pleased to be able to support Marine Rescue in providing such a vital community service. Panasonic’s Toughbook is ideal for the task of being out at sea in all weather.

“This unit is sealed to prevent water ingress, as well as being able to withstand vibration, drops, shocks and extremes of temperature. It is wireless ready and is designed for high GPS accuracy, so Marine Rescue can rely on it in any situation.”