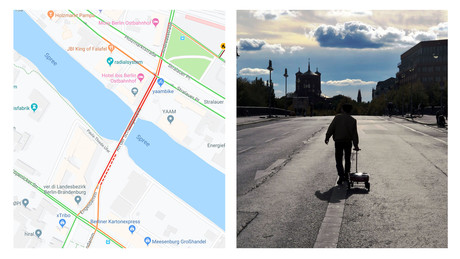 It was a bright and sunny day on a quiet Berlin street. Google Maps had 99 problems, and they all came in a little red wagon.

Earlier this year, the assistant of digital-focused artist Simon Weckert set off down a green street with 99 second-hand smartphones and created a virtual traffic jam.

The resulting red road aimed not only to highlight Google Maps’ susceptibility to providing real-time misinformation, but also, its effect on driver behaviour and perception and the ‘relationship’ between ‘enabling’ and Google Maps’ surveillance, control and regulation, Weckert’s website explained.

Google Maps identifies congestion by tracking phones’ location and speed, with the assumption that phones are on the road with drivers, according to a post by Ars Technica.

Taken together, these data points cause Google Maps to display a green road if traffic is “moving smoothly”, or a red one, with potential rerouting information, if traffic appears “severe”, Ars Technica said.

While this often works for “millions of drivers around the world”, it can be tricked by — say — a man with a large number of smartphones walking at an average of three to six kilometres per hour, rather than “the speed of even a very slowly driving car”, the publication said.

It should be noted, however, that the method only worked if he was moving and the phones had to be taken up and down the same street. Further, the ‘traffic jam’ disappeared when another vehicle using Maps drove past, 9to5 Google said.

Weckert — who got the idea for ‘Google Maps Hacks’ after noticing the app had misinterpreted a gathering of people at a Berlin May Day demonstration as a traffic jam — hoped the project would raise questions about the level of trust in the technology and the way society has adapted to it, the Washington Post reported.

“Google’s map service has fundamentally changed our understanding of what a map is, how we interact with maps, their technological limitations, and how they look aesthetically,” Weckert’s website said.

“Google Maps makes virtual changes to the real city,” it added. Here, rerouting by Google Maps and similar apps puts pressure on residential roads initially designed for smaller amounts of traffic, leading to increased gridlocks and — in some cases — accidents.

Additionally, applications such as Airbnb and Carsharing, which interface with Google Maps, have an “immense impact” on cities’ housing market and mobility culture, and together with Uber and Deliveroo, among others, help “create new forms of digital capitalism and commodification”, the website said.

To date, Weckert’s tweet about the project has garnered over 35,000 likes and almost 16,000 retweets.

An inclusive training course from the Indigenous-owned enterprise will prepare the under- and...