Goldfields Occupational Medicine (GOMED), an independent occupational medical facility, has let go of its legacy technology and telephony provider after the facility experienced three months of IT downtime in two years. A new telephony solution has given GOMED’s boss, Tim Spokes, the peace of mind to set out on an overseas holiday. 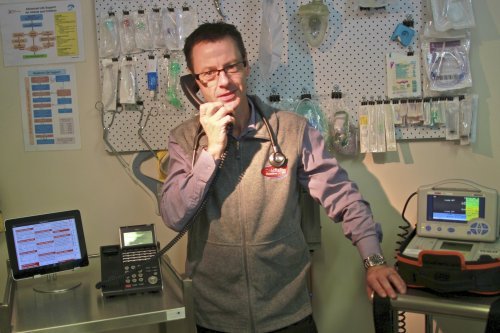 GOMED is located in the heart of the Goldfields, Kalgoorlie, Western Australia. The seven clinical staff at GOMED have vast experience in both mining and heavy industry, and the organisation offers a broad range of health services to support the specific needs of heavy industry, men’s health and primary care to mines in surrounding areas, including mine health surveillance, advanced digital aided diagnostics, drug and alcohol testing and pre-employment medicals that can be quite extensive.

The organisation is heavily reliant on IT for a variety of purposes including electronic health records; communication of pathology results and digital X-ray and image results; and, like most medical practices, relies heavily on IT to treat patients in a timely manner and to successfully manage the backend of the business.

GOMED had been having ongoing issues with a legacy technology provider that had seen the IT system suffer over three months of downtime in two years. This downtime meant loss of patient contact, leading to a decrease in income through not being able to take calls to book in appointments, and had also resulted in the loss of the vital 24-hour emergency contact service.

Spokes says: “There was an impact not only on the practice income, but [also] in staying in touch with our patients and keeping up to date with medical data and downloads. Reliable systems are key when it comes to e-health and none more so than telephony - our business is still highly reliant on the telephone for bookings and remote patient care.”

On 22 December 2010, GOMED’s entire IT and telephony systems were suddenly turned off without warning and the business was almost paralysed without a telephone or internet connection.

To ensure reliable IT and communications and to avoid a repeat of the sudden downtime under the previous system, NEC dealer KalTelCo Services and Telstra worked together to install new IT and telecommunications systems.

They were able to have new IT and telephony systems based around NEC’s SV8100 communications server working with Telstra ISDN2 services, together with a Telstra Internet Direct Service, up and running between Christmas and New Year, with only two days of downtime for the business.

Practically, for GOMED, this means full visibility of all extensions within the office, flexible programming options for employees, the ability to reroute incoming callers to prevent ‘lost calls’ from patients, a large number of speed dial locations available, and one-touch buttons to access these and other functions.

GOMED is currently making use of a number of the unified communications features of the solution including voicemail, email and IP telephony.

Spokes says that the business has seen some great improvements since the installation.

“We have seen a 35% increase in income, a 50% decrease in unanswered calls and zero downtime,” Spokes says.

“After-hours calls management has improved by 100%, and we have since employed three new staff and one new receptionist because the patients can get in contact with us and the message system lets them know we will return the call,” he says.

“I now have peace of mind and am going on my first overseas holiday in two years! I know that with a one-button push, my medical staff and I can be in contact,” Spokes says.