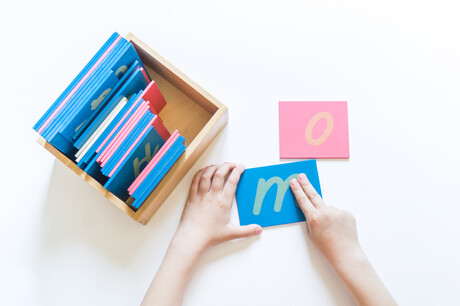 Studies have confirmed that learning is made easier through finger tracing — a practice used by education pioneer Montessori in the early 1900s.

Young children were encouraged to trace over letters of the alphabet made from sandpaper with their index fingers, based on the intuition that a multi-sensory approach (ie, visual, auditory, tactile and kinesthetic) to learning would be most effective. In 1912, Montessori noticed that children, after mastering the sequence of tracing a letter with their index finger, “took great pleasure” in closing their eyes and trying to recall it.

Over 100 years later, her method has received some empirical validation. Two new University of Sydney studies show that not only is tracing an effective learning technique; if it is used in conjunction with imagination, its positive effect could be amplified.

Previous Sydney School of Education and Social Work research demonstrated a link between tracing and maths performance. Now, tracing in maths and science lessons has been specifically found to reduce people’s cognitive load (the demands placed on the conscious mind by a range of cognitive activities), thereby enhancing their ability to learn. It has also been found to potentially increase their learning motivation. Once students have built a foundational understanding of a topic through tracing, asking them to close their eyes and “imagine” the steps while tracing enhances learning more than additional tracing with eyes open.

“Although Australian schools are trending upwards in terms of maths and science performance, there’s still room for improvement,” said Associate Professor Paul Ginns, the academic supervisor and co-author of the papers.

“Our research shows that tracing and imagination strategies can help. They are cost-free, simple, and can be easily implemented in classrooms, across a range of lesson topics and media.”

In the first study, published in Educational Psychology Review, 93 Year 4 and 5 students from a school in Shanghai, China were being taught about the properties of angles in a triangle. They were randomly assigned to the control condition, the tracing condition, or the tracing/imagination condition, and then given ‘calculate the missing angle’ examples to complete under practice and test conditions. The control group were instructed to leave their arms by their sides. The tracing group traced the shapes, and the tracing/imagination group were instructed to trace the shape with their eyes open, then close their eyes and imagine the tracing.

Following this, all groups completed a 13-item questionnaire that measured motivation and different types of cognitive load during the learning process. A further experiment investigated whether these findings could be generalised to a new mathematics topic (mental mathematics), a different age group (Chinese tertiary students), and an alternative format (tracing out ellipses in difficult “mental mathematics” worked examples).

A mini meta-analysis combining the results of the two experiments showed that students who traced the shapes solved similar problems more quickly. Students who traced also reported lower levels of cognitive load and higher levels of intrinsic motivation during the lesson, compared to those in the control group. In some instances, tracing then imagining resulted in faster solution times for test questions than tracing alone.

Published in Educational Technology Research and Development, the second study involved adult participants. It considered how instructions to point at and trace over elements of a lesson on the lifecycle of a star on a computer screen would help them learn.

44 people were pre-tested on their knowledge of astronomy, then during the lesson they were instructed to either ‘use their hands’ to make links between text and an associated part of the diagram or to keep their hands in their laps. The first group reported lower cognitive load and higher interest and enjoyment of the lesson. Importantly, when tested on what they’d learned, students who used their hands while studying not only remembered more basic facts from the lesson but were also able to transfer that understanding to solve problems not directly covered in the lesson.

“There are multiple reasons why tracing can help learning,” Associate Professor Ginns said.

“It seems that humans are biologically wired so that we pay closer attention to the space near our hands. So, when using an index finger to trace visual stimuli, these elements of a lesson receive processing priority. Tracing can also assist learning because it ‘chunks’ all the important elements of new material into one piece of information, making it easier for us to learn.”