Why Windows 8 will succeed 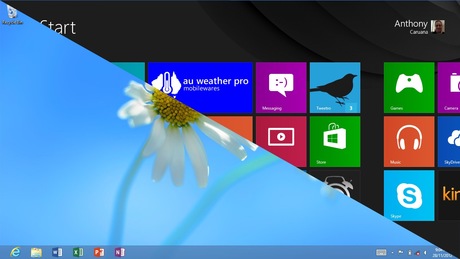 There are many Windows 8 naysayers out there. But have they got it wrong?

There are a lot of people saying that Windows 8 is a usability nightmare and that it is destined to fail on the corporate desktop. The reasons are varied but the main issue seems to be around the duality of the user interface. On one side, there’s the new tiled interface that has been variously called Metro, Modern but is not simply called the Windows 8 interface where applications typically cover the full screen. On the other is the old desktop paradigm with a taskbar, system tray and the ability to run multiple applications in overlaid windows.

Last week a usability expert, Jakob Nielsen, published his analysis of the interface saying that the double desktop led to cognitive overload and a “prescription for usability problems”. You can read the full report on his concerns with Windows 8 usability.

IBRS analyst Joseph Sweeney said, in an upcoming column in Technology Decisions magazine, that businesses that try to deploy Windows 8 tablets and expect to manage them just like traditional Windows laptops are going to find users working around IT and using their own devices because the way tablets are used is fundamentally different and traditional computer management methods won’t work. In other words, IT departments may end up being the reason Windows 8 tablets, like the Surface, fail.

So, experts are telling us that Windows 8 may end up being another Vista, that leaves Microsoft scrambling to once again repair its relationship with customers.

After three weeks of using a Windows Surface device, I’m going to respectfully disagree with the experts. We think that there are five factors in play that will ensure Windows 8 will succeed and be seen as a step forward by Microsoft.

I have used, for real work over extended periods of time (several weeks or months in each case), both iPads and Android-based tablets. Both platforms offer thousands of applications, access to cloud services, excellent battery life and travel-friendly form factors. However, opening, editing and saving Microsoft office documents requires the user to shuffle files. And there’s no native version of Office for those platforms (yet - although there are rumours of Android and iOS version of Microsoft Office coming in 2013).

There are the Office Web Apps but these deliver only a subset of the full Office functionality and rely on internet connectivity - not useful if you’re on a plane.

Windows 8 and Windows RT tablets don’t suffer from this problem. You can open, edit and save documents using Microsoft Office with no loss of complex formatting and save files easily to a USB stick, the local file system or the network.

It is true that the two faces of Windows 8 can be confusing. But, that confusion does pass after a short time of using Windows 8. On a tablet device, once an application is maximised it really makes no difference that you’re in desktop mode.

If you prefer the desktop over the tiled Windows 8 interface, it’s only ever one tap away using a mouse or the Windows key on your keyboard.

Yes - it can be jarring to move between the two application styles but UI inconsistency is something that every platform suffers from.

Every business has a suite of applications that it runs that are essential. They might be accounts systems, ERP, remote access, CRM, reports and bespoke applications. If they run on Windows 7, chances are they are going to run, unmodified, using the Windows 8 desktop.

With other mobile platforms, businesses need to investigate VDI systems or users create workarounds that might open the company up to security issues if they involve storing data in unsecured ways. Given a choice between workarounds and ‘just works’ - users will ultimately vote with their feet although the emotional links with specific devices - such as Apple’s ability to get consumers emotionally attached with their iPads and iPhones - will take time to break.

Windows 8 is not a standalone product in Microsoft’s eyes. In the enterprise, the desktop, notebook and mobile platforms are part of a broader fabric.

Windows 8 and Windows RT devices can be managed centrally from System Center using Configuration Manager and InTune respectively. Even though the two versions of Windows have different management tools, they can be accessed from one location. However, it’s not until System Center 2012 Service Pack 1 is released early in 2013 that the ability to deploy Windows 8 will be centrally controlled. Until then, it is possible to deploy and manage devices.

Other platforms require businesses to go outside their existing management stack if they want to enforce policies, deploy corporate applications or even add basic settings such as email accounts or proxy servers.

Over the next year, just about every computer purchased by enterprises will be Windows 8 ready. We’d expect support for Windows Vista and Windows 7 to fall away for newer devices in that time. In other words, as new hardware comes into businesses, Windows 8 will slowly infiltrate businesses.

As that happens, and coupled with Microsoft’s new attitude that will release improvements in smaller increments rather than the past policy of large service packs and monolithic OS updates, some of the usability issues that have been raised will be addressed and the software will continue to be made more robust and secure.