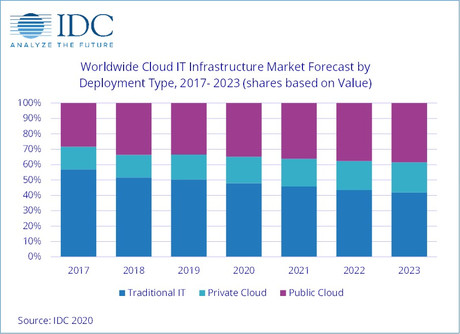 Despite the lacking performance, IDC said the overall cloud IT segment is trending up, with public cloud susceptible to increased volatility each quarter as a few hyperscale service providers dominate a significant part of the segment.

“This softness of the public cloud IT segment is aligned with IDC’s expectation of a slowdown in this segment in 2019 after a strong performance in 2018. It is expected to reach $44 billion in sales for the full year 2019, a decline of 3.3% from 2018,” IDC said.

As a result, IDC slightly increased its forecast for total spending on public and private cloud IT infrastructure in 2019 to $65.4 billion, representing a flat performance compared to 2018.