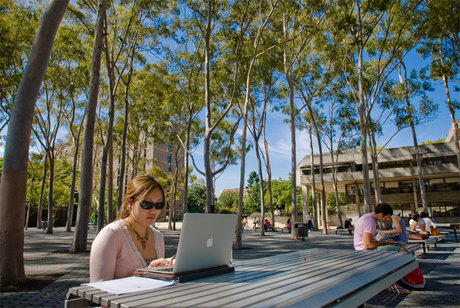 Macquarie University has revamped its wired and wireless networks in anticipation of growing bandwidth needs.

Peter Hole, Manager, Implementation at Macquarie, said, “We’re actually trying to be a bit proactive and avoid problems, rather than fixing them.”

Hole wanted to strengthen the university’s network in anticipation of growing demand for bandwidth.

The network also had to match the increasing demands of the university’s online learning program. Hole said that 70 to 80% of lectures are already being recorded and made available for download via the web. This includes audio, visuals and sometimes video clips.

Hole and his team are also piloting other bandwidth-heavy applications like projecting close-up video of physiotherapy procedures onto large screens in lecture theatres.

The two priorities of the revamped network were speed and reliability, leading Hole to implement multiple parallel 10 gig links across the campus, so that it’s “bigger than we need today, but we’re trying to get some life out of it and not restrict what we’re doing”.

At each point on the network, the solution provides between one and three backups, to provide redundancy should a piece of kit fail. Hole said Avaya’s proprietary SMLT (split multilink trunking) technology was one reason why the university chose this solution.

In Hole’s words, SMLT means that “there is no packet loss at all when there’s a failure. You can turn half of it off and nothing stops. Even if a video is streaming, you don’t notice an interruption in the video or the audio.”

Following the implementation, network speeds have improved across the campus, with some buildings exhibiting 100 times the throughput they had previously.

The university has also been able to “vastly extend” its wireless network coverage, Hole said.

Previously, the university had only 150-200 wireless access points, which really only covered the busiest spots of the campus. Now, with more than 1000 access points, “wireless is everywhere”, Hole said, and there are no black spots.

This increase in wireless availability is important, given Hole’s estimate that wired network devices - desktop PCs, for example - make up only around 10% of devices on the network and that student bandwidth use is growing at a compound rate of 25-30% per year.

Macquarie also has a “very strong” drive to demonstrate sustainability, Hole said, but “it’s a bit hard for IT to actually find good news stories in sustainability, because we’re usually about plugging in something else that uses electricity”.

But, he said, he and his team have been able to prove that the new solution “is much less power hungry and requires less cooling” than both the previous kit and several competing solutions that the university could have implemented as part of this project.

“We’re actually putting in something that is much more powerful, but uses less energy than the previous technology.”