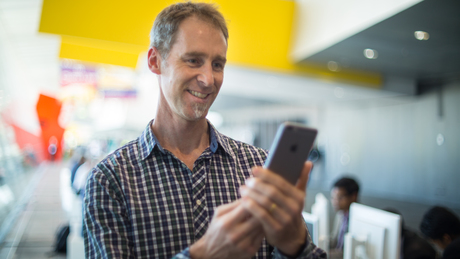 Knox Grammar School is one of Sydney’s best-known independent schools. Established by the Uniting Church in 1924, the day and boarding school caters for almost 2500 boys in classes ranging from kindergarten to year 12.

Located across two campuses, the school is home to a wide range of first-class academic, sporting and cultural facilities, including an aquatic centre, gymnasium, squash and weights rooms, and music and drama centres. Classrooms are equipped with the latest technologies and the school maintains a one-to-one student-to-laptop ratio. Currently in the process of an IT transformation, the student environment is now primarily Mac-based.

Storage is refreshed or replaced every five years. In addition, three years into each cycle, the IT department reviews requirements with an eye to adding more storage if needed.

Mike Israel, IT manager, explained, “Typically, at the beginning of the five-year cycle we buy enough storage to get through the next three years and plan to supplement for the final two. We don’t buy five years in advance because we don’t need that capacity straight away.”

In early 2014, Israel embarked on Knox School’s latest three-year storage review. “We’d got to the point where we needed to expand. We were also looking to use the review to improve our DR [disaster recovery] measures,” Israel stated.

At the time, the school’s disaster recovery plan was based on the practice of off-site backups. Data from the prep school was backed up to the senior campus, and vice versa. While it gave some protection, Israel noted, “We didn’t have any hardware or real standby facilities.”

Israel and IT infrastructure manager Andrew Cullen approached five solution integrators, including the incumbent EMC, with the request for a supplementary storage solution.

“We left our list of requirements quite open because we didn’t want to limit what they might be able to come back with,” Israel said. “Datacom were the only ones, with the possible exception of Dell, who really dug into our requirements and designed a solution to meet our needs.”

Datacom recommended the school deploy a Nimble Storage CS240 array on each campus, with full replication between the devices. Although Israel admitted he had never head of Nimble before, Datacom’s proposal was the one Knox finally accepted.

“We really liked the design of Nimble’s technology and the use of flash storage to speed up responses,” Israel noted. “The hardware replication was good and so was the compression. We looked at a few different compression technologies during the review as a way of optimising our storage, but we really liked Nimble’s approach.

Cullen said although Datacom offered to manage deployment, the IT department chose to undertake the process in-house. “I had one day of Nimble training before going ahead with the purchase. That was enough for me to be confident that I could set up the arrays at both sites.

“It was a fairly straightforward process. The Nimble arrays now have all our storage for our virtual environment, databases and applications. Apart from our unstructured data, we’ve migrated everything over to Nimble so we can take advantage of the replication and snapshots,” he added.

The ability to manage in the face of a disaster has been further boosted with the implementation of VMware SRM (Site Recovery Manager). “This is one of the main benefits of having hardware replication,” Cullen explained. VMware SRM hooks into the Nimble system and uses the hardware to seamlessly control fail-overs.”

Cullen said the Nimble solution has greatly simplified storage management. “It’s very easy to clone virtual machines, set up test environments or access old snapshots of servers or data. Because the Nimble appliances are so easy to operate, we’ve found we can spread the burden and involve other IT staff when making changes on the system. We couldn’t do this before because our old storage systems were a little too complex.”

In addition to improved data protection, capacity and performance improvements, Cullen said the solution is delivering compression benefits as promised. “Datacom and Nimble gave us realistic expectations of what we could expect, and in some instances, we are getting more than we thought we would.”

The Nimble deployment has delivered the storage boost that Knox’s IT team was after, ensuring performance and capacity needs can be met until the school’s next five-year storage cycle begins.

“We’re in the end two years of the cycle, so by late next year our EMC arrays will reach end-of-life and we’ll be looking to start the process again. That will involve either supplementing the Nimble solution or adding something new. Our intent at the moment would be to expand the Nimble,” Israel concluded.