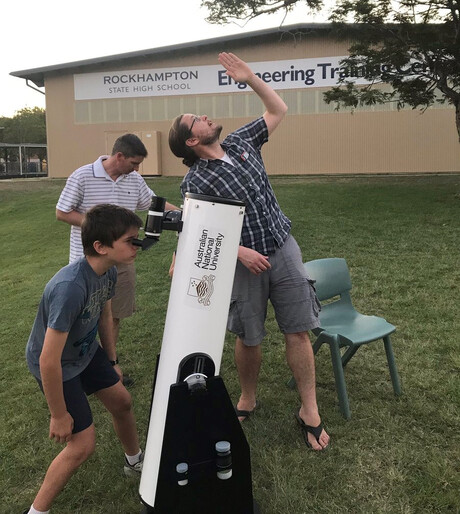 Children in remote and regional schools will soon be visited by astronomers bearing gifts in a quest to kindle interest in the cosmos.

The scientists — drawn from the ranks of the ARC Centre of Excellence for All Sky Astrophysics in 3D (ASTRO 3D) and the Australian National University — will donate a powerful telescope and high-tech accessories to each school so classes can continue to explore the Universe long after the astronomers have left.

Astronomy is important in itself, but its introduction can also spur interest in other science, technology, engineering and math (STEM) subjects.

“Country kids can study STEM subjects at school, but access to professionals and specialist programs is difficult because they are mainly located in larger towns and cities,” said ASTRO 3D’s Dr Delese Brewster, one of the architects of the program.

“But kids in rural areas have a huge advantage in astronomy. They see big skies with minimal light pollution. This program aims to inspire children across Australia to look up and explore the Universe.”

The project, called Scientists Taking Astronomy to Regional Schools, or STARS, will see working astronomers and PhD students visit dozens of primary and secondary schools. They will conduct workshops, hold star-gazing evenings and show students how to operate the telescopes and properly record the data they gather.

“In rural locations, the skies are very dark and the stars pop out, just using your eyes,” said ANU’s Dr Brad Tucker, who was key to creating the STARS project.

“But by using a good quality telescope you can see so much more. We know that the students, schools and the communities will be able to make good, continuing use of the ones we bring. We will support them to develop detailed and inspiring astronomy projects for years to come, as well as a passion and love of science.”

STARS will get under way later this year thanks to a Federal Government Maker Projects: Community STEM Engagement grant, aimed at encouraging STEM education in schools.

The grant was announced by the Minister for Industry, Science and Technology, the Hon Karen Andrews.