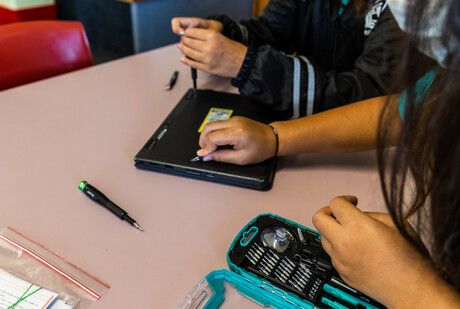 A new initiative in Auckland schools will source used laptops and desktop computers from businesses and households and gift them to students.

The program will also teach students as young as eight years of age how to diagnose, disassemble and refurbish laptop components into devices with ‘as new’ operating capabilities. They can then share these devices with others in their communities.

Stats show that up to 150,000 school-aged children in New Zealand do not have access to an internet connection at home. Government research also suggests Maori, Pasifika, and those living in social housing or with disabilities are the most digitally disadvantaged.

The West Tech project is a partnership between Auckland Council’s innovation unit, The Western Initiative, and youth development charity Zeal. Funding is provided by hospitality group The Trusts. A parallel program with local libraries will also increase access to internet connections in the homes of young people.

Chris Winder, spokesperson for Zeal, said a pilot program carried out across a partner primary school found participating students reported increased levels of self-confidence. He said their research also found students face additional barriers to home-based learning — those who received devices during lockdowns often had no one at home able to support them in using the technology.

“Based on studies carried out by our partner schools, as many as 27% of akonga [students] went without internet connection during the first lockdown,” said Winder.

“A third (33%) of these students didn’t have access to a learning device and over half (59%) of those with devices were sharing with siblings. A quarter (24%) were sharing a parent’s phone.”

Winder said that with just seven hours of learning time, a student can gain the ability to refurbish a defunct device.

He said laptops and PCs tend to slow over time, becoming bloated with software and poorly managed file storage. They may also encounter common errors which cause the computer to crash.

“At this point most devices would then be considered surplus to many businesses, who will look to upgrade with a new product.

“The devices will then usually enter the waste stream in some way; however, most can be restored to their original condition or broken down for salvageable parts.”

According to industry figures, only around 2% of the 80,000 tonnes of electronic waste is recycled in NZ annually. The project aims to upcycle over 1000 devices in the coming year, eventually increasing this to meet an estimated shortfall of 20,000 devices annually — the equivalent of taking 80 cars off the road for a year and preventing up to 460 tonnes of e-waste from entering landfill.

The upcycled computers — most of which would have otherwise entered the waste stream — can also be provided to the families and communities of the students who graduate the program, to help reduce access barriers to technology.

Winder said they are aiming to expand the program further — providing more advanced componentry such as graphics cards, which could launch more students into a career in graphic or game design.