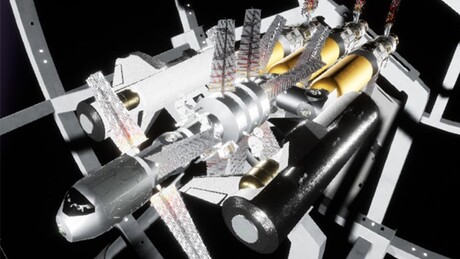 A prestigious space race competition has been won by a student team from Toronto High School.

Twenty-five schools from three nations — Australia, Egypt and the United States — were involved in the virtual race to the fictional planet Vulcan.

The six-day challenge required contestants to design a concept spacecraft and plot its interstellar navigation through outer space.

Year 9 students Chris Olde, Sebastian Hornsby and William Roberts along with Finn Pirret in Year 8 also had to create a simulated base station and overcome challenges such as optimising fuel usage on transfer orbits between planets.

The students used the virtual reality software SpaceCRAFT, a program that models space and planetary environments using planetary and physics data from NASA, during the competition.

“The dedication and skill level of the students can’t be overestimated, it bodes well for the future international space community,” Chamitoff said.

The students were mentored through the competition by professional astronauts, engineers and scientists, all of whom have been directly involved in actual space missions.

“It’s a partnership focused on skills and workforce development and links industry with schools in order to make the curriculum more interesting and workplace-relevant.

“The LEAP team engaged deeply with the program and have an ongoing interest in this area. It’s sparked possible career pathways for these students.”

MathWorks and online learning platform edX have announced the availability of MATLAB Essentials.

The official opening of new learning facilities has been celebrated at three Brisbane schools.