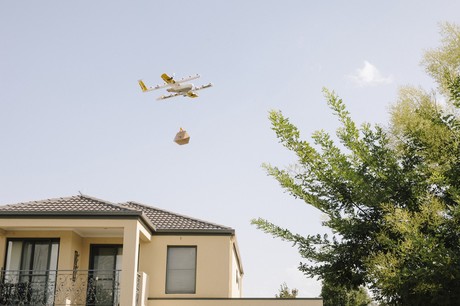 Imagine the possibility of having goods delivered straight to your doorstep, as soon as you need them.

This is the future envisioned by Wing, which has teamed up with local businesses and launched its first air delivery service in North Canberra.

Customers can order local items such as over-the-counter medications, food or coffee, and have a drone drop them off at the front door within minutes.

According to Wing, these delivery drones "have the ability to pick up a package from a business or home, fly to a designated destination, and gently lower the package to the ground in a precise location".

In addition, "Wing's drones map the best route to a designated location using the UAS traffic management system (UTM), which manages the drones' flight path from take-off to landing", helping it to avoid colliding with trees or buildings that might be in the way.

Wing said that "initially, the service will be available to a limited set of eligible homes in the suburbs of Crace, Palmerston and Franklin", with aims to expand to more customers in Harrison and Gungahlin in the coming weeks and months.

Wing has been testing drone delivery in Australia since 2014. Over the past 18 months, it has delivered food, small household items and over-the-counter chemist products more than 3000 times to Australian homes in Fernleigh Park, Royalla and Bonython communities.