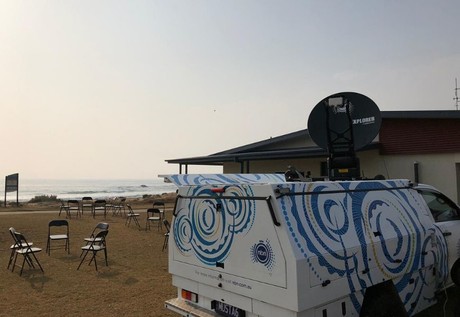 Australian telecommunications operators are working to restore networks in bushfire-affected areas, allowing communities to receive vital emergency information and reconnect with the outside world.

“Many of the outages are due to power supplies being cut off, and in some cases are the direct impact of fire on network infrastructure,” stated the Australian Minister for Communications, Cyber Safety and the Arts, Paul Fletcher.

Losing these critical lifelines has prevented people from calling for help and support, receiving emergency information and connecting with loved ones to affirm safety.

According to Fletcher, “The current fire situations across Australia have made access difficult and unsafe at some sites to assess and restore services.”

As a result, telecommunications operators such as NBN Co have been “working around the clock in coordination with state and territory emergency management authorities to determine when it is safe to access bushfire-affected areas — including under escort conditions where necessary — to restore services and maintain backup generators with fuel to keep services operational where possible”, the Australian Government said.

“As and when it is safe for technicians to access infrastructure sites, restoration work is getting underway. The extent of fire impact to power and communications infrastructure in some regions means work to repair and rebuild will be ongoing,” Fletcher said.

In the meantime, temporary facilities have been installed at Batemans Bay, Somerville and other evacuation centres around the NSW South Coast and Victoria’s Gippsland region, with NBN Co providing evacuees with Wi-Fi, connectivity services, charging stations and access to ABC bushfire updates via its Road Muster trucks and Sky Muster satellites, according to the government.

Telstra, Optus and Vodafone have also said they will cover registered volunteer firefighters’ mobile phone bills over December and January.

The ABC has installed a temporary radio transmitter to restore radio coverage in Batemans Bay after its tower was destroyed, the government said.

“It is important to remember that no form of telecommunications is 100% resilient, and people should not be relying on a single means of communications,” Fletcher said.

“In many cases, a portable transistor radio with a spare set of batteries is a vital way to receive emergency information, in the event there is a loss of mains power or mobile coverage,” he said.

“The ABC and other local radio stations are doing an excellent job transmitting vital emergency information to Australian communities,” the government added.

“Telstra and Optus are offering targeted relief packages in affected regions in NSW and Victoria, including free use of payphones, call diversions from affected lines and other financial assistance,” the government concluded.

More information on telecommunication service availability can be found via: