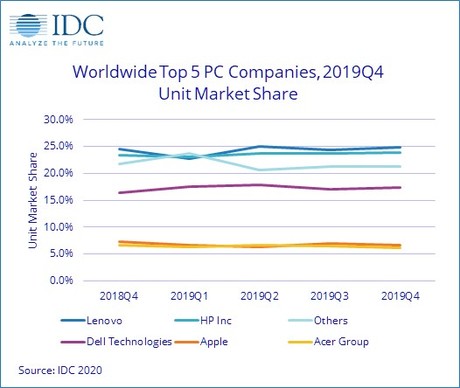 The traditional PC market grew for the first time in eight years during 2019, with global shipments growing 2.7% year-on-year to around 266.7 million, according to IDC.

The research firm estimates that fourth-quarter shipments grew an impressive 4.8% year-on-year to 71.8 million units. But shipments increased during three of the year's four quarters.

IDC attributed this growth in large part to businesses rushing to transition to Windows 10 before the end-of-support date for Windows 7 today.

"This past year was a wild one in the PC world, which resulted in impressive market growth that ultimately ended seven consecutive years of market contraction," said Ryan Reith, Program Vice President with IDC's Worldwide Mobile Device Trackers.

"The market will still have its challenges ahead, but this year was a clear sign that PC demand is still there despite the continued insurgence of emerging form factors and the demand for mobile computing."

But IDC cautioned that the next 12–18 months will be a challenging time for the traditional PC market, which may struggle to continue this momentum now the Windows 10 upgrade cycle is complete.

Apple obviously did not benefit from the Windows 10 upgrade cycle, with total Mac shipments falling 2.2%. But the company retained fourth place ahead of Acer with a market share of 6.6% to Acer's 6.4%.