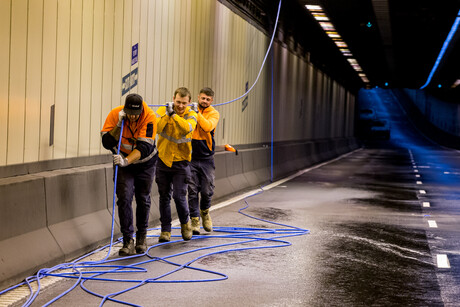 Aussie Broadband is laying 720-core optical fibre cable through the Sydney Harbour Tunnel, as part of the company’s privately owned dark fibre rollout in NSW. The NSW build marks another step in its network rollout and is expected to be finished early next year.

Installed by Global Utility Construction, the fibre cable will link Sydney CBD to North Sydney. Managing Director Phillip Britt said the tunnel is a significant part of the build because it will string together the main fibre run.

“In many ways, it’s very similar to our first build in Melbourne. We had originally planned to install a cable through the water, like a submarine cable. But there was already an available duct that runs through the tunnel so we decided to take that route instead,” Britt said.

Aaron Wright, Managing Director at Global Utility Construction, said the company has had to operate on a strict schedule to complete the work, due to the heavy traffic in the tunnel, with a four-hour window available on specific nights only. Approximately two kilometres of fibre has been laid so far.

“It runs from near NBN’s Dalley POI or Point of Interconnect through the tunnel and out into North Sydney. The next POI on the north is St Leonards, but that’s 2–3 km north of the tunnel exit,” Wright said.

The new fibre network can offer speeds of up to 10 Gbps for business customers and speeds in excess of 100 Gbps for specialist applications.

“It will pick up three Equinix data centres in Alexandria and the NBN POIs in Newton, Glebe, City South and Dalley. This is the hardest part because there’s about 3.5 km of civil construction needed in Alexandria alone,” Wright said.

Britt anticipates that all POIs will be connected at the same time.

“Sydney will be a simple run from Alexandria to Macquarie Park, but the diverse path will follow. There’s around 1000 m to construct in Macquarie Park and it will pick up two data centres: NextDC S1 and NextDC S2,” Britt said.

In Victoria, Aussie Broadband is running fibre to suburban NBN POIs in Hawthorn, Kew, Balwyn North, Nunawading and Ringwood. St Kilda, Caulfield and Cheltenham NBN POIs are expected to be completed in the next few months.

“We plan to build fully diverse routes to over 75 NBN POIs and 24 key data centres across Australia,” Britt said.

How to measure ROI of field service management software