Australians lost over $300 million to scams last year as cybercrime continued to surge amid the COVID-19 pandemic, according to new research from Savvy.

The price comparison company’s Online Scams Report found that Australians have meanwhile already lost over $72.2 million in the first quarter of this year. This represents a $10 million increase compared to the same quarter a year earlier.

The top scam types by amount lost are investment scams — responsible for $48.8 million of losses last year — followed by dating and romance scams with $8.1 million in losses.

The report found there has been an 84% spike in scams in the past year. The sharp rise in cybercrime has targeted the education, government, healthcare and medical research sectors.

Other industries in the crosshairs include communications, software vendors, financial and legal services, and real estate, the report added.

SMEs are most at risk as they typically have less cybersecurity protection, according to the report. An estimated 43% of cyber attacks target SME businesses.

But the report also cites research suggesting that cybercriminals are able to penetrate 93% of company networks. The report cites Verizon’s annual Data Breach Investigation Report as suggesting that outsiders are the biggest culprit (70%) followed by organised crime groups (55%) and insiders (30%).

Meanwhile, ransomware remains one of the top threats, with attacks now occurring once every 11 seconds. 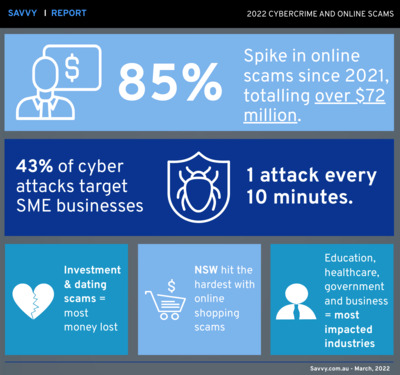 Online shopping scams represent another significant threat, with New South Wales ($21 million) and Victoria ($16 million) the states most impacted by this threat activity. But Queensland ($12 million) and Western Australia ($11 million) are not far behind.

“As the cost of cybercrime continues to rise, more organisations will need to invest in cybersecurity to protect their in-house and remote teams,” the report concluded. “Businesses and families can protect themselves by managing their biggest risks and the culprits that make people vulnerable, such as a lack of established protocols and unsecured networks.”

The report notes that adoption of zero trust approaches to identity and access management has also reached new highs in 2022 in response to the growing threat landscape.