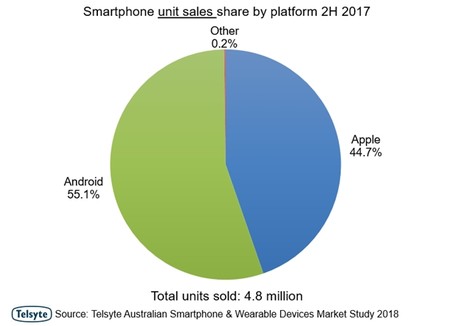 Australian smartphone sales bucked the global trend to experience strong growth in 2017, driven by a replacement cycle for Android handsets, according to research from Telsyte.

Overall smartphone sales grew 11% during the year with 9.2 million units sold, Telsyte estimates. Around 4.8 million of these were sold during the second half of the year, representing 6% year-on-year growth.

This compares to the nearly 1% decline experienced by the global handset market during the year, according to estimates from IDC.

There are now around 19.3 million smartphone users in Australia, with 10.3 million of these on Android, Telsyte added. The top three Android vendors during the second half of the year were Samsung and Chinese vendors OPPO and Huawei.

But while Australia has around 8.6 million iPhone users, the arrival of the iPhone X did not deliver the predicted upturn in Apple’s sales during 2017, mostly due to its high price tag and late arrival during the calendar year.

Australians are by contrast proving themselves willing to pay more for higher internal storage — the average cost of a smartphone in Australia has grown by more than 30% since 2015 as a result of smartphone users seeking models with more storage. Internal storage has also grown to become the fourth most important criteria when choosing a smartphone, up from sixth last year.

But the average replacement cycle has now increased to closer to three years, compared to the previous two, with 44% of smartphone users stating that their main reason for not buying a new device is that their existing model is still in good condition.

Apple captures the highest brand loyalty, with around 85% of iPhone users who purchased a replacement cycle in 2H17 selecting another iPhone. Samsung came next with a 70% repeat purchase rate.

Mobile payments are also taking hold in Australia, with around 14% of smartphone owners having completed a mobile contactless payment transaction at a payment terminal in store at least once.

While Android Pay is widely supported among Australian banks, more than half of Apple Watch users in Australia cannot use Apple Pay with their primary banks. As a result, a significant proportion of iPhone and Apple Watch users (22% and 32% respectively) are more likely to bank with a provider that supports Apple Pay.

To limit the damage done by a successful cyber attack, companies should ensure each of its...