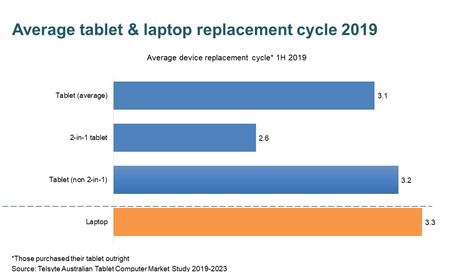 The Australian tablet market contracted 2% in the first half of the year as the market continued to transition towards tablet/laptop hybrids, according to Telsyte.

Total unit sales fell to 1.44 million despite a “mini boom” in sales of 8″ tablets as a result of the release of the 2019 iPad mini. Total sales of this form factor grew 16% year-on-year.

This boom helped Apple increase its total sales by 5% year-on-year. Apple, meanwhile, remained the clear market leader, with iOS-powered tablets accounting for 53.4% of total sales during the quarter.

This compares to 27.4% for Windows tablets — up 3% year-on-year. Sales of Android tablets, meanwhile, contracted by 28%, with the operating system’s market share falling to 17.6%.

Windows currently dominates the 2-in-1 laptop tablet hybrid category. Telsyte research shows that 3.9 million Australians are now using a 2-in-1, with Windows having a 65% market share. But Telsyte expects Apple’s share to increase due to the expanded range of iPads that support Apple’s smart keyboard and the release of the new iPadOS.

“The slate-only format is rapidly being replaced by 2-in-1s as Australians seek to replace older laptops and tablets with converged touchscreen devices with keyboards,” Telsyte Senior Analyst Alvin Lee said.

The replacement cycle for 2-in-1s is significantly shorter than the cycle for traditional tablets, at 2.6 years to 3.2, the company’s research indicates.

Another factor expected to drive growth in the 2-in-1 market, as well as future tablet upgrades more generally, is the continued improvement of wireless connectivity, such as eSIM support.

“Mobile connected 2-in-1s are ripe for growth in the coming years as carriers look to increase network utilisation beyond smartphones,” Lee said.