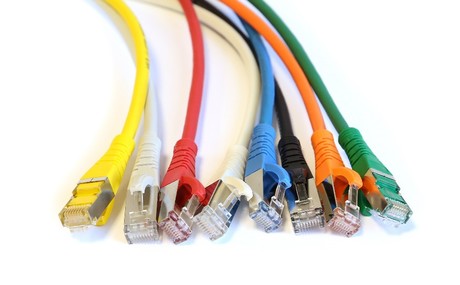 Data communication history is closely linked to the developments in cabling and the connecting hardware. High-performance data networks cannot perform well without appropriate cables and connectors. Due to the evolution of technology and increasing demand for higher networking speeds, cable and components have been developed that can transmit faster speeds over longer distances.

Copper classes were introduced to clearly define network parameters to ensure that the appropriate connecting hardware was installed. Introduced in the late 1980’s, Category 3 (CAT3) could support voice services as well as 10BASE-T Ethernet. This was superseded by Category 5 (CAT5), which was able to support faster network speeds of up to 100Mbps, in the mid 1990s.

Over the past decade, Category 6 (CAT6) and Category 6A (CAT6A) cable and connectors have become an indispensable means of data transmission. CAT6, which can support gigabit network applications and bandwidths of up to 1GbE and 250MHz, has fast turned into a basic requirement for new buildings and is quickly replacing CAT5E in residential environments.

Category 6A (CAT6A), which supports data rates of 10G up to 100m and bandwidth of up to 500MHz, has grown in popularity with many data centres and enterprise networks adopting CAT6A as the new minimum requirement. Other developments in CAT7, CAT7A and CAT8 are also continuing which will support even higher data transfer rates and bandwidths.

CAT6 offers many advantages and benefits over CAT5E cabling infrastructure, providing greater bandwidth and allowing for higher data transfer rates. As well as being able to easily support 1Gbps network speeds, CAT6 can also support higher data rates of 10Gbps — however, 10Gbps is only supported over shorter distances of 37–55 metres.

CAT6A cabling is capable of supporting data transfer rates of up to 10Gbps at a maximum bandwidth of 500MHz and has additional and tighter twists, with additional insulation to reduce crosstalk. CAT6A is also backwards compatible with CAT6 and CAT5E, however, speeds are limited and will perform to the lowest category cable or connector that is installed in the link. CAT6A is fast becoming the lowest cost-effective solution as it is seen as a future-proof cable system. CAT6A components are used in Class EA networks as defined in ISO/IEC 11801 and TIA/EIA 568.

One of the perceived disadvantages of CAT6A is the size and weight of the cable. Originally 50% larger when it first appeared in 2008, the cable sizes have since been reduced and slimmed down by 10% and nowadays even further. The additional weight and diameter also reduces the amount of cable that can fit into a cable tray and where you can place them. This results in a larger cable tray and conduits and smaller bundle size. Further space is also required for the cable bend radius in the cable tray, patch panel and behind a wall outlet.

Termination methods and times had also been seen to be a negative for CAT6A installation, however, new modular jacks, as well as toolless jacks and outlets which can be terminated in the same time as CAT5E or CAT6 jacks have helped reduce installation time and cost.

Another consideration when it comes to cable selection, is whether to use a shielded or unshielded solution. CAT6A cable is available in various configurations — shielded and unshielded cables are often referred to as F/UTP, S/FTP or U/FTP (shielded) and U/UTP (unshielded). Each solution has its place, as well as its own set of benefits.

When it comes to data cabling, most will look at the cable performance when deciding whether to install CAT5E, CAT6 or CAT6A cable. A big factor that is often overlooked when choosing what cable to install is its outer sheath. The outer cable sheath is extremely important as it protects the internal copper pairs from damage and acts as an insulator from external interference.

The 2 main types of cable sheath used in network cables are Polyvinyl Chloride (PVC) or Low Smoke Zero Halogen (LSZH). When deciding whether to use PVC or LSZH cable, an important consideration should be how it will react in the event of a fire. The health and safety of individuals should always be the most important and deciding factor.

Though PVC or LSZH cables may look identical on the outside there are a number of key distinguishing factors between them. LSZH cable has a flame-resistant jacket that doesn’t emit toxic fumes even if it burns, and a good LSZH cable will be self-extinguishing to a certain point to help stop the fire from spreading.

PVC cable jackets burn very easily, and fire can easily spread from room to room or floor to floor simply by burning along the cables. Another danger is that the smoke and fumes emitted by PVC cable is toxic, corrosive and detrimental to your health.

Building standards and fire safety codes in Australia and throughout the world are placing more stringent requirements on fire safety, with many carrier, data centre and enterprise networks specifying that only LSZH cables are to be used.

When choosing work area patch cords or LAN cable and regardless of whether CAT5E, CAT6 or CAT6A cable is being installed it is always important to think about what cable sheath type you require and to think of the potential risks associated with that decision. Always check your building fire safety requirements and make an informed decision in order to minimise risks.

Warren and Brown Technologies offers both PVC and LSZH copper cable options in CAT6 and CAT6A, however we do recommend using LSZH wherever possible. Providing local technical and network design support, stock availability, as well as fast production and delivery times, WBT deliver a level of expertise and service that allows you to deploy your network on time, on budget and without headaches.

NT should become a "digital gateway to Asia"

A Northern Territory Government-sponsored report recommends the establishment of a data centre...

Fujitsu Australia has announced a phased plan to expand its Western Sydney data centre campus to...