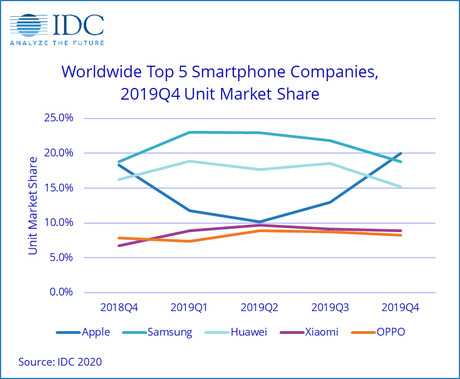 Apple has come back in quarter four 2019 (4Q19) to top smartphone shipments for the period and capture 20% of the market, according to the International Data Corporation (IDC).

It follows the technology giant’s 4Q18 to 2Q19 slump, which left the company owning almost half its current share.

“The strong demand for the [iPhone] 11, combined with healthy trade-in promotions and financing plans, made the new device more accessible to a wider variety of consumers than ever before. Looking forward, rumors of an ‘SE’ follow-up device could have Apple earning even more share in emerging markets if the price hits a sweet spot with budget-minded buyers,” IDC said.

Overall, Samsung took the number one spot for 2019 and Huawei hung on for second place, despite “ongoing challenges outside China and a notable drop in 4Q19”.

“Huawei’s performance continued to be strong in China, but while it has been diligently building up a presence as a top-tier smartphone player in Western Europe, that’s where shipments saw the biggest hit,” IDC Worldwide Mobile Device Trackers’ Associate Research Director, Melissa Chau, said.

“Things will continue to look challenging for Huawei given that the trade war is still not yet resolved while new uncertainty raised around the Wuhan coronavirus could potentially have adverse effects on not just Huawei, but all players reliant on the China smartphone supply chain.”

Even with these “strong” performances, total worldwide smartphone shipments decreased 1.1% year over year in 4Q19. This was partly due to “weak shipment growth in China, where consumers are still waiting for cheaper 5G handsets to hit the market, alongside increased network coverage and 5G speeds”, IDC said.

“Although the overall market dropped once again in 2019, the fourth quarter proved successful for some of the top players such as Apple, Xiaomi and OPPO, largely due to new models but also shifting focus away from China.

“Both Xiaomi and OPPO performed well in India and are starting to gain traction in Western Europe in a similar fashion to Huawei a few years ago.

“Apple performed well domestically as its market share broke 50% in the fourth quarter. Looking forward, 5G handsets — and to be more precise, affordable 5G handsets — will need to be the big catalyst in 2020 to avoid [another] consecutive year of decline,” Scarsella concluded.