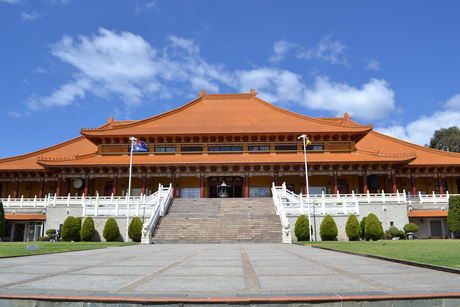 Situated in Wollongong, south of Sydney, the Nan Tien Temple is one of the largest in the Southern Hemisphere. Opened in 1995, the complex is one of a network of temples operated by the Taiwanese Fo Guang Shan Buddhist order, which has more than 120 branches around the world.

As well as being a place of worship, the temple has become one of the city’s biggest tourist attractions. Visitors can participate in a range of activities including meditation classes, calligraphy sessions and tai chi. The temple now has a new education facility in its grounds, becoming Australia’s first government-accredited tertiary facility based on the Buddhist order.

Like any growing organisation, Nan Tien Temple requires a sophisticated IT infrastructure to support its diverse range of activities. As well as the new education facility, the infrastructure must also cover a branch office in Sydney and connect with other temples around the world.

Earlier this year, the temple’s IT team realised it would require upgraded data storage resources to properly support its growth. The existing equipment had served the organisation well, but it was not able to deliver the capacity and performance that would be needed in the future.

“As well as our new branch office in Sydney, we were planning the rollout of a VDI (virtual desktop infrastructure) platform for our staff and students,” said Ted Lu, IT director, Nan Tien Temple. “We realised our existing storage equipment could not provide the platform that would allow this to succeed.”

Further to the VDI project, the IT team was also keen to improve the organisation’s disaster recovery capabilities. It was planning to replicate the storage resources at its main site within the new Sydney office. This would allow rapid failover should any problems occur at either location.

VCPro was engaged by Nan Tien Temple to assist with the decision on which storage platform would best suit their VDI requirements. After reviewing a range of storage options in conjunction with VCPro, the Nan Tien Temple IT team made the decision to implement two Nimble CS220 storage arrays. The first was installed at the main site in Wollongong and the second in the new Sydney offices.

Following a successful rollout delivered and implemented by both VCPro and Nimble Storage, work began to install a VMware-based VDI solution at both sites to support both administrative staff and students. The team has also configured the arrays to support bidirectional data replication between both locations to allow rapid DR failover.

“Eventually, we will have more than 500 students and 50 staff using our VDI infrastructure based on the Nimble storage,” said Lu.

The new Nimble infrastructure provides a total of eight terabytes of data storage in each of the two locations. Key administrative applications are already supported and the education resources will follow.

“We have already noticed a significant improvement in performance and availability from the Nimble arrays,” said Lu. “The DR failover capabilities between sites that we now have in place also gives us peace of mind for our business continuity plans. If we lost one node, we would still have the second node operating and this means we could be up and running again within minutes.”