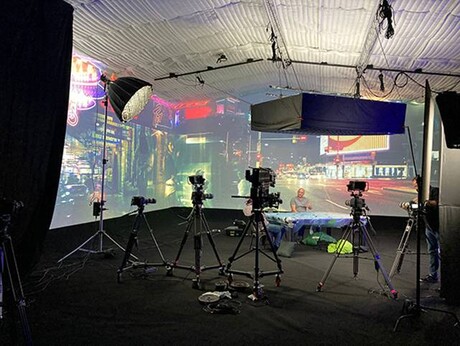 The supervising producer for Nine Network’s Under Investigation imagined a unique, realistic and immersive environment for panel discussion, and settled on Epson projectors to deliver.

“I wanted both an ‘organic’ feel to the set background and also an immersive environment for the panel discussion. I didn’t want the ‘video’ look of a green screen set and originally thought of using LED panel-wall. I then did a test shoot using projectors and immediately decided they provided the ‘look’ I was after.

“I also wanted the studio monitor and screen to have the same look and so also decided on rear projection for that element too,” Harvey said.

The primary requirement was to have projectors powerful enough to illuminate a large studio without the projected image being washed out by the studio lighting.

“It was also critical to have ultra-short throw projectors, so that the projectors could be close to the studio backdrop and allow the set and cameras as much space as possible without interfering with the projector beam,” he said.

The program uses two EB-1755UNL projectors fitted with ELPLX02 ultra-short throw lenses for the backdrop and an EB-L1505UHNL projector fitted with an ELPLU03 short throw lens, for the rear projection screen, with Harvey pleased with the performance — particularly the size of the image that could be projected versus the short distance to the studio wall.

“This allowed us complete freedom of movement and we could easily set props in front of the projectors. The image was also intense enough to be unaffected by studio lighting,” he said.

The production uses the projectors as the set background and on the rear projection to feed pre-recorded video to the studio discussion. They ‘stitch’ two 16:9 images together to form a panorama backdrop in the studio.