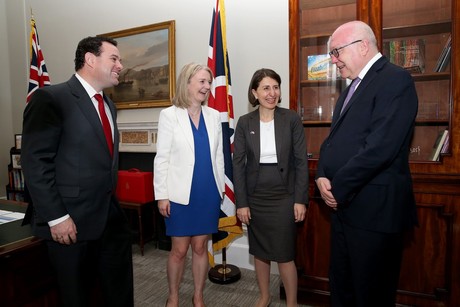 The meeting focused on opportunities afforded by the start of open banking in Australia and the Australia–UK Fintech Bridge, which was established last year to set out a framework for ongoing cooperation between the two nations on fintech issues.

Berejiklian said NSW’s strong foundations in fintech and financial services made the state a “natural home for UK companies seeking a foothold in the Asia–Pacific region”.

“We have much to offer the UK in the Asia–Pacific region and in turn we also have much to learn from their cutting-edge technologies. As the epicentre for technology, innovation and entrepreneurship in Australia, there is no better location for UK firms to expand,” she added.

Sydney is Australia’s financial services capital, being home to the global headquarters for leading Australian banks and over 60 international banks, as well as the Reserve Bank of Australia, Australian Stock Exchange and Australian Securities and Investments Commission’s head offices, according to the NSW Government.

NSW also has the highest number of headquarters of superannuation funds, fund managers and insurance companies in Australia, the government added.

The Premier is on a trade mission to the UK and Germany with the Minister for Jobs, Investment, Tourism and Western Sydney Stuart Ayres, exploring new partnership options for NSW, from 11 to 16 August.