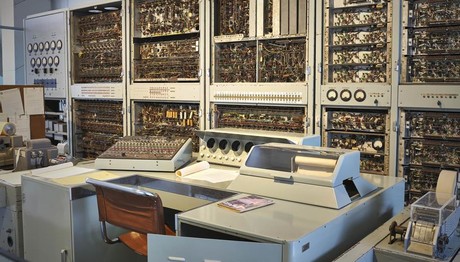 An iconic computer has been added to the Scienceworks Think Ahead exhibition in Melbourne.

Half the size of a shipping container and about a millionth of the speed, computing power and volume of a smartphone, it was at the cutting edge of the new field of computing when it was built in 1949. CSIRAC is Australia’s first stored-memory computer, and the fourth in the world to ever be built.

“CSIRAC is one of the most significant objects in Museums Victoria’s collection of over 17 million items and has an important role to play in highlighting both the history and current state of computer technology, in Australia and internationally. CSIRAC’s story shows that Australia has a strong record of innovation in STEM and we hope it inspires a fascination in technology and science in visitors of all ages,” he said.

Originally engineered at CSIRO in Sydney, CSIRAC was moved to the University of Melbourne in 1955. After taking a year to reassemble, it was ceremoniously switched on in 1956.

For the next eight years, CSIRAC provided a highly sought after computing service for science and industry. Demand for time using CSIRAC was so great that people often had to wait weeks to gain access.

Operating for approximately 30,000 hours and tackling around 700 projects, it was used to play the first electronic music, make weather forecasts, calculate mortgages and even play some of the first computer games.

CSIRAC was large, energy-hungry and temperamental, particularly on hot days. Occasionally somebody would plug in an electric jug, overload the power system and all that day’s work would be lost. But engineers were consistently working to improve its storage and speed.

“This room-filling machine is the technological ancestor of your phone or laptop, but was nowhere near as powerful and definitely couldn’t fit in your pocket,” said Shearer.

Pearcey Foundation member and former head of the Department of Computer Science at the University of Melbourne Dr Peter Thorne worked with CSIRAC as weekend computer technician in the early 1960s.

He said that to the Australian ICT sector, CSIRAC is a symbol of our nation’s sustained excellence in information and communications technology, from the very beginning of the computer age.

“CSIRAC is now recognised internationally as the only survivor of the handful of machines that launched the modern digital age and as the first computer to play music,” he said.

“The Pearcey Foundation (named in honour of Trevor Pearcey who initiated the design of CSIRAC) is collaborating with Museums Victoria, CSIRO, Australian Computer Society, universities and the computer industry, to ensure that CSIRAC, and our remarkable ICT heritage, has the widest possible exposure and that it continues to inspires our excellence in the ICT field.”

CSIRAC has been in Museums Victoria’s collection since 1964 and was on display at Melbourne Museum from 2000 until 2017.

It has been relocated to the Think Ahead exhibition at Scienceworks which imagines how advances in science and technology will change the way we live in the future. It presents both historic and contemporary technology, as well as digital interactives.